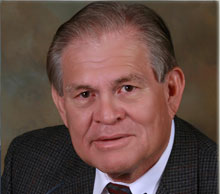 Robert F. Perez has been practicing law since 1972.

Growing up, Mr. Perez saw first-hand how his parents, who were able to speak both English and Spanish, became advocates for their community by tirelessly assisting others in interpreting for them at medical appointments, and often with making funeral arrangements. While this took time away from their work, and their paychecks, they never asked for anything in return believing that it was their duty to help their neighbors. This attitude has followed Mr. Perez through his life.

Upon graduating law school with Great Distinction, Mr. Perez became an associate with the Law Offices of Armando O. Rodriguez, who later became a Judge of the Superior Court of California for the County of Fresno. In addition to being a practicing attorney, from 1976 through 1980, Mr. Perez was also an Associate Professor of Criminology at California State University, Fresno, and he became a full professor from 1990 through 2008. In May of 2008 he became a Professor Emeritus of Criminology with the University.

Mr. Perez first became a partner in his own law firm in 1975, and though his firm has gone through different partners through the years, his guidance and sense of dedication to his clients has always remained.

During his career Mr. Perez has obtained over 30 judgments or settlements of 1 million dollars or more.