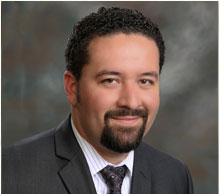 Mr. Uribe was born in Jalisco, Mexico. At the age of 3 months, his family immigrated to the Central San Joaquin Valley where he was raised in the rural farming town of Easton, CA. After graduating high school, he attended the California State University-Fresno, in pursuit of his undergraduate degree. Mr. Uribe also began working with the law firm at the same time he began his studies. In 2003, after Mr. Uribe obtained his degree, he left the firm in-order to pursue his career in engineering.

In 2006, Mr. Uribe was approached by several of the partners at Perez, Williams, Medina, & Rodriguez, LLP to see if he was interested in a position, believing that his experience, ability, and studies would be valuable in plaintiff and applicant advocacy, to which he gladly accepted. Within a few months, he decided to apply for law school.

In 2007, Mr. Uribe began studying at the San Joaquin College of Law. While in law school, part of his job required him to go to the Mexican Consulate in Fresno and give lectures on various legal topics to people who are waiting to obtain their passports or other Mexican legal documents. Another part of his job allowed him to be a hearing representative for injured workers, requiring him to go to the Workers Compensation Appeals Board and cover depositions for clients.

In the summer of 2011, he graduated from law school and began practicing law with the firm in December 2011.

Disclaimer: Note that use of this form as means of contacting this firm or any individual attorney of this firm does not constitute legal advice and will not establish an attorney-client relationship.